The top 5 breweries in Israel Beer is probably one of the oldest drinks around since the first days of humanity. In addition to the “high” feeling we experience due to the alcohol in it, in beer you can find different minerals and vitamins that are unique. In the past decade or so, the world trend of micro breweries reached Israel and is evolving rapidly. Now days, you can find in many restaurants and bars at least one brand of local craft beer.

Like always, we bring you our top 5 breweries in Israel:

1.  Malka brewery – Malka  brewery was established in Kibbutz Yechi’am, at the foot of the fortress, in the Galilee, facing the sea. Since then, the brewery produces ales in a traditional manner and in small batches. The water used      to brew Malka beers comes from the springs of the Ga’aton adjacent to the Kibbutz and it is simply delicious.

2. Taybeh brewery – Taybeh Brewing Company is a family owned business established in 1994 following the Oslo Peace Agreement (1993) when David Khoury and Nadim Khoury were inspired by their late father, Canaan David Khoury (1926-2002) to return to their home village of Taybeh after spending more than twenty years in the United States and establish the first micro brewery in the Middle East. 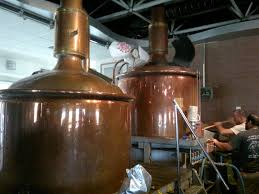 3. Golan brewery – The north of Israel has some of the best conditions in the world for making beer. Amazingly pure water, great soil to grow the hops in and the perfect climate – cool nights and warm days. Golan brewery takes all of these and creates one of the best beers in Israel – Bazelet (named after a volcanic rock common in the area).

4. Dancing camel brewery – In addition to being one of the leading breweries in the country, the Dancing camel is also a pub, a perfect match if you think about it. If you happen to be in the neighborhood come taste some of their great beers.

5. Beer bazaar – Although it’s not a proper brewery (they do make their own beer but in a guest brewery), this place is a must for every beer lover that comes to Israel. In their display you can find, among their own house brew “Fat cat”, over 90 different brands of Israeli craft beers! They have 2 branches in Tel Aviv’s Carmel market and now opened a new one in the famous Mahne yehuda market in Jerusalem.

So guys, all is left to do is say Lehaim and take a long sip!