The local drinks every tourist in Israel should know There’s nothing like trying some of the local drinks in order to know more about the local culture in almost any new destination. Even though Israelis are not considered big drinkers  compered  to other people, you can still find some pretty good alcohol when visiting the country. This are some local drinks that every tourist has to try:

“Goldstar” beer is an Israeli brand of 4.9% abv lager. The beer was introduced in 1950, and is currently the top-selling beer in Israel. It is marketed as a dark lager beer, though it is amber in appearance. “Goldstar” beer was referred to in the song “Tel Aviv” by Duran Duran on their 1981 album Duran Duran. Even though “Goldstar” is definitely Israel’s official beer, in the last few years the boutique beer industry is blooming and now you can find, almost in any bar or super market, some smaller local beers. 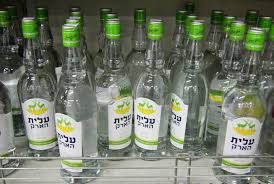 Tubi 60 is the new addition to the list of must try drinks in Tel Aviv. No one really knows what’s in it but one thing is sure –  it will get you really drunk! This cloudy, lemony drink is originally made in the northern city of Haifa but took the bar scene of Tel Aviv by storm. According to it’s maker, Hilal Tubi, the drink contains over 30 kinds of herbs and essences, thous giving it it’s unique flavor.

Even though the local wine industry is relatively young in Israel, you can find many, surprisingly excellent wines here and that is mainly, due to the ideal conditions the region possess. Warm days and cold nights, especially in the north part of Israel, are the perfect climate for wine making. Israeli wines excel in many international wine competitions and won many awards.

Last thing, If you didn’t know, cheers in Hebrew is L’ehaim (to life). Now you are ready 🙂